To share your memory on the wall of Joseph Ross, sign in using one of the following options:

Provide comfort for the family of Joseph Ross with a meaningful gesture of sympathy.

Print
Celebration of a Triumphant Life

Joseph Louis Ross quietly and softly accepted the call of God and departed this earthly life on Sunday afternoon, February 24, 2019 at the Jersey Shore University Medical Center in Neptune, New Jersey. B... Read More
Celebration of a Triumphant Life

We encourage you to share your most beloved memories of Joseph here, so that the family and other loved ones can always see it. You can upload cherished photographs, or share your favorite stories, and can even comment on those shared by others.

Posted Jan 28, 2020 at 02:12pm
JESUS Is Lord!!! Grace, Mercy, and Peace be unto you from God our Father and our Lord JESUS Christ. My name is Prophet Orain A.C. Ming, son of Rev. Rush and Evangelist Delita Carroll, and Senior Pastor of JESUS Is Lord Ministries, Inc. I know and remember Apostle Ross from my childhood when he was Rev Ross then, and the Music Minister and one of the organist in the Church I grew up in, Providence Baptist Church, Harlem NYC, USA. In those days, he was a great expositor and oracle of God's Holy WORD, a wonderful musician (responsible for the Church's one Gospel Album, a marvelous work with my father), and a great friend. He was a giant of a man, not just in physical stature, but more so in kindness and caring which he generously showed to all (even a little boy who looked to and admired him). Apostle Ross was tremendous blessing to my family, and I had the honour and privilege of being a friend and playmate of his son, the now Bishop Darren Ross, another great blessing. Thank Lord for Apostle Ross, and thank you Apostle Ross for your love and the memories. My condolences to the Ross family and to the Prayer Temple Church. May The Lord Bless you and Keep you in JESUS Name. Grace and Peace.
Comment Share
Share via:
PR

Posted Mar 31, 2019 at 10:43pm
I want to offer my warm and deepest condolences for the loss of your family member. May the God of all comfort give you the comfort you need in your time of grief. I would like to share a encouraging thought from Gods word found in the Holy Scriptures John 5:28-29 says don't be amazed at this, for the hour is coming in which all those in the memorial tombs will hear his voice 29 and come out
Comment Share
Share via: 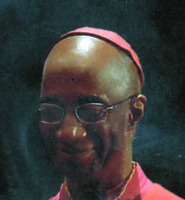