To share your memory on the wall of Richard Darby, sign in using one of the following options:

Richard Lee Darby affectionately known as WEASEL was born in Cameron SC on March 18th 1952.
He Earned his Wings with the Lord Jesus Christ on December 26th 2019.
He was born to the late Ern... Read More
RICHARD LEE DARBY
Obituary

Richard Lee Darby affectionately known as WEASEL was born in Cameron SC on March 18th 1952.
He Earned his Wings with the Lord Jesus Christ on December 26th 2019.
He was born to the late Ernest Darby and Ruth Mae Corley Darby. He was the youngest of nine children.
As a youth he practiced Marshal Arts . Weasel attended Richman High School as well as Mid Manhattan.

He worked as a cashier for Cyril grocery Store. He was famous for his (Spice Ham and Cheese Hero Sandwiches) Weasel was loved by
many. He became a member of Serenity Restoration Ministries in 1994.
He was Ordained as a deacon in 2016. Richard Darby (Weasel) loved to eat.
If you say you cooking he said I'm coming. He loved some OXTAILS.
His smile was very Heart warming and anything he could do for you he would.
Our Father was a loving man and cared about his family. He called his kids every
other day just to make sure we were ok, He loved his basket ball and always made
jokes when someone went against his team.

Richard Darby preceded in death his six siblings, Robert Darby Lucille Montgomery,
Mattie Switzer, Lillie Mae Darby, Ernest Darby, John Darby. He leave to cherish his memories
His three lovely daughters Deloris Tippins, Vennie Rivers, Mignonette Rivers.
His Brother James Darby and his Sister Pernell Smoke. His Sister n law's Asalee Darby,
Geraldine Crawford, and Bettie Williams. The special ladies were Rhonda Tippins and Emma Rivers.
Nine Grand Children Joe, Travis, Shawn, Alberto, Angelous, Malik, Melody, Aamar. His Two
Special Nieces Lorraine Darby and Beverly Switzer that was by his side at his time of need.
Along with a host of Nieces and Nephews, great nieces and nephews, Family and Friends,
his God Daughter Shanequa. WE WILL ALL LOVE AND MISS HIM VERY MUCH.
Read Less

We encourage you to share your most beloved memories of Richard here, so that the family and other loved ones can always see it. You can upload cherished photographs, or share your favorite stories, and can even comment on those shared by others.

Plant a Tree in Memory of Richard
Plant a tree 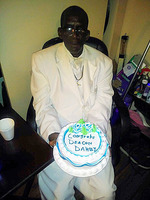