To share your memory on the wall of Margaret Smalls, sign in using one of the following options:

Margaret Smalls was born on Saturday, February 14, 1942 to the late Toby and Nancy Smalls in Allendale, South Carolina. She was the last born of nine children; seven of which preceded her in death... Read More
Reflection of Life
Margaret Smalls

Margaret Smalls was born on Saturday, February 14, 1942 to the late Toby and Nancy Smalls in Allendale, South Carolina. She was the last born of nine children; seven of which preceded her in death (Lula, Georgia, Robert, John, Toby, Cleo and Grace) and her only surviving sister, Emily.
At the tender age of 2 years old, Margaret and her family moved to New York City. She began her education in the New York City school system at the age of 4. She attended elementary school P.S 10, and then Junior High School P.S. 81 both in Harlem. She then went on to attend and graduate from High School.
In 1964 she met and fell in love with the love of her life Calvin Foster and to that union twin sons (Claude and Clyde Foster) were born.
Her early career in life was a housekeeper/home attendant, she was also a successful Avon representative who moved up the ladder in management to the corporate office of Avon. Margaret later changed careers and went on to work as an office manager in the New York State Department of Social Services and Shelters, where she worked until she retired several years ago.
Margaret was an avid reader and book collector, and she spent many days and nights reading hard cover books and her Nook tablet, which she carried everywhere she went. She was also a world traveler, whether by cruising or flying to different faraway places, she just loved to travel and take pictures and she had a very extensive collection of pictures from all over the world from Alaska to the Great Wall of China.
She loved spending time with her grandchildren, especially at Christmas time and even when she wasn't feeling her best she made sure she still put up a Christmas tree, hung Christmas stockings and decorated the house for her grandchildren. Margaret also liked to cook and bake and if you came to her home she always wanted to feed you.
Margaret was a hard working woman, and so full of character, she lived her life to the fullest. She was a pillar of strength for her family, and was deeply cherished and we will miss her dearly.
She leaves to hold dear her memories, her sons Claude & Clyde Foster, daughter-in-laws Tracey and Tamika, her sister Emily Gilliard, 10 grandchildren (including her first Tynise Vega); three great-grandchildren, 24 nieces and 29 nephews, a host of cousins, family and friends and her traveling buddies including her special friend/sister Margo Irace who still cared for her and traveled with her up until the day she departed this life.
Lovingly submitted, The Family
Read Less

To send flowers to the family or plant a tree in memory of Margaret Smalls, please visit our Heartfelt Sympathies Store.

We encourage you to share your most beloved memories of Margaret here, so that the family and other loved ones can always see it. You can upload cherished photographs, or share your favorite stories, and can even comment on those shared by others. 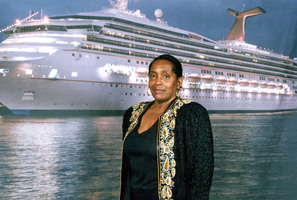